New Delhi: Ahead of the New Year 2022, actress Samantha Ruth Prabhu is enjoying downtime with her besties in Goa and seems to be having the time of her life. The ‘Family Man 2’ actress had shared a few clicks from her vacay on Instagram and she appeared to be glowing with happiness and joy.

Samantha had donned a boho, printed monokini and seemed to be enjoying the water at a river the group had stumbled upon during their nature hike.

Samantha also shared another picture with her girlfriends with the caption  “A little bit of heaven”.

Take a look at the pics: 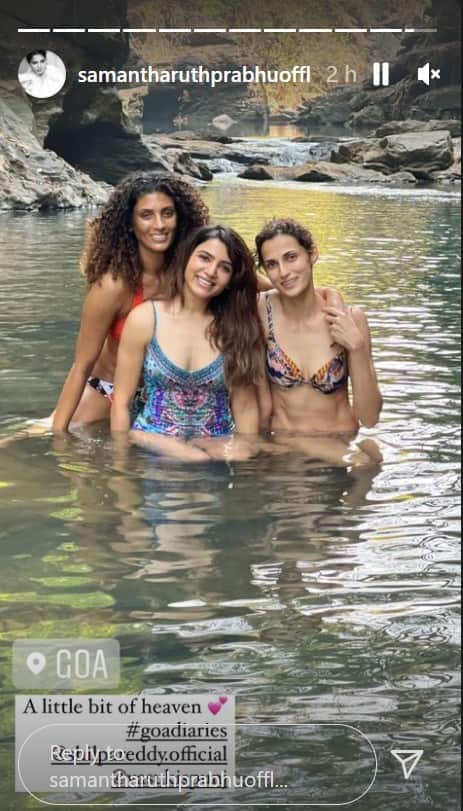 The actress has had a tough year as she announced her divorce from her ex-husband Naga Chaitanya in October.

In a joint statement, they said that they ‘decided to part ways as husband and wife to pursue (their) own paths’. Days later, she lashed out at troll attacks on her character and dismissed false rumours of her affairs and abortions.

Weeks after the announcement, she spoke about her feelings about the separation and said she felt like she would ‘crumble and die’. But, as she realised that she is going to live her life, with all the issues, she appreciates herself for being such a strong woman. “I never knew I could pass this. I am proud of myself because I never knew I was this strong”, the ‘Shakunthalam’ actress said.

Samantha also mentioned that her divorce from Chaitanya took a toll on her mental health. But she tried her ways to get better.

Samantha, on the work front, has been busy signing new ventures, and will soon be working on two multilingual projects, of which one is titled ‘Yashodha’.

She was recently seen in a dance number ‘Oo Antava’ in Allu Arjun’s film ‘Pushpa’.