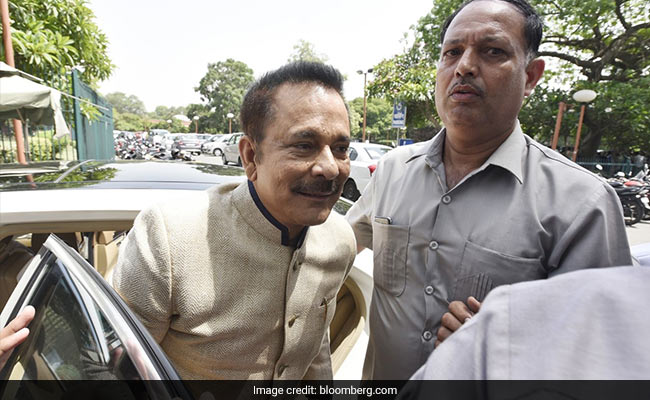 Sahara group has said that funds worth Rs 24,000 crore are lying unused with SEBI

Sahara Group on Wednesday said it is unreasonable to ask it to deposit more money as funds worth Rs 24,000 crore are lying unutilised with markets regulator Securities and Exchange Board of India (SEBI) for the last nine years and it was hurting the business interests of the group.

The statement comes a day after SEBI chairman Ajay Tyagi had said that Sahara is yet to fully deposit the money ordered by the Supreme Court in August 2012 and that the group has so far given only around Rs 15,000 crore while the total amount due to be deposited is Rs 25,781 crore.

According to SEBI’s 2020-21 annual report, the regulator had paid back only Rs 129 crore to bondholders and that it was maintaining an escrow account with over Rs 23,000 crore.

In a statement, Sahara Group said Supreme Court had ordered on August 31, 2012 to deposit principal amount and interest assuming that every depositor has to be paid which was not the case and this came to the knowledge of the court within three months’ time from pronouncing the order.

“The Supreme Court took note of the fact that the number of claimants who were still to be repaid, were far less. Hence, it is an incorrect statement from Sebi to ask Sahara to deposit more,” the group said.

It, further, said the regulator after giving four rounds of advertisements in 154 newspapers in the last nine years across the country has repaid only Rs 129 crore to the investors of Sahara.

In its last advertisement that was published in March 2018, SEBI made it clear that it would not entertain any further claim received after July 2018, Sahara said.

“It means that for SEBI there are no more claimants to be paid which is due to the fact that majority of investors were already repaid by Sahara; and as per the order of  Supreme Court, the amount of Rs 24,000 crore will eventually come back to Sahara so there is no question of further payment,” the group said.

“It is unreasonable to ask Sahara to deposit any money further as this huge amount of Rs 24,000 crore is lying unutilised with Sebi for the last nine years which is not only hurting the interest of Sahara as a business organisation but also impeding the economic growth of our country especially in these testing times,” it added.

The group maintained that more than 95 per cent of its bondholders investors have already been repaid.

Sahara said it deposited more than Rs 24,000 crore, including interest, since 2012 till date in Sahara-Sebi escrow account only to honour the order of the court as the majority of its investors are already repaid. These payments are actually double payment against single liability, first the repayment was made to investors by Sahara and then again the equivalent amount is submitted to SEBI, it noted.

On Tuesday, Mr Tyagi said SEBI is just following the Supreme Court orders of 2012 on the matter and the company is yet to fully deposit the court-ordered amount with them.

He had also said the regulator has issued many advertisements asking investors/ bondholder to come forward and who have made their claims have already been paid.

According to SEBI’s annual report, it was holding Rs 23,191 crore of Sahara Group bondholders’ money as of March 2021 and the said amount was held in an escrow account.

The amount in the account included Rs 15,473 crore recovered and the interest on it, the report said.