NEW DELHI: Aamir Khan and Kiran Rao parted ways in July this year after being together for 15 years. And since then, there have been several speculations doing rounds around their separation.

Recently, some pictures of Aamir Khan and his ‘Dangal’ co-star Fatima Sana Shaikh went viral on social media. The photo suggested that the Bollywood Mr Perfectionist has tied the knot with Fatima. However, we must tell our readers that it’s not true and the photo is actually a morphed picture. For the unversed, Fatima Sana Shaikh was mercilessly trolled by netizens when Aamir and Kiran announced their separation. Trolls accused the actress for being the reason behind their divorce and called her names.

Take a look at the viral photo below: 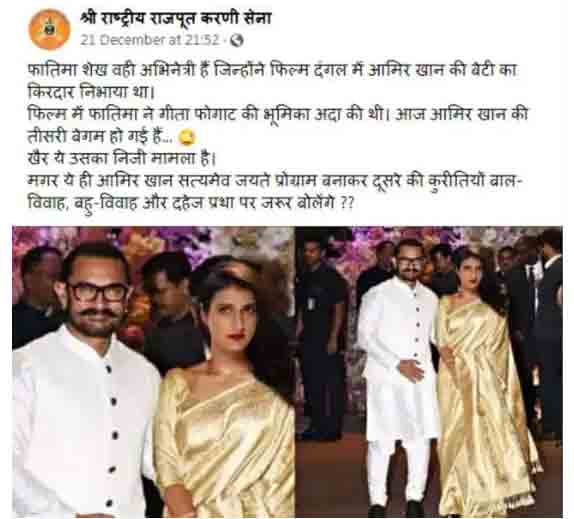 In the original picture, Aamir was standing alongside Kiran Rao. The former couple, who continue to co-parent their son Azad, had posed for the paparazzi at Akash Ambani and Shloka Mehta’s engagement ceremony. Whereas the photo that has gone viral on the internet has Fatima’s face superimposed on Kiran’s face.

We again tell our readers that the viral photo of Aamir and Fatima, where she is seen sporting a sindoor, is not real.

Speaking about Aamir-Kiran’s divorce, they released a joint statement and it read, “We will also continue to work as collaborators on films, ‘Paani Foundation’, and other projects that we feel passionate about. A big thank you to our families and friends for their constant support and understanding about this evolution in our relationship, and without whom we would not have been so secure in taking this leap. We request our well-wishers for good wishes and blessings, and hope that – like us – you will see the divorce not as an end, but as the start of a new journey.”

On the other hand, Aamir and Fatima have worked together in films like ‘Dangal’ and ‘Thugs of Hindostan’. They share a great friendship.