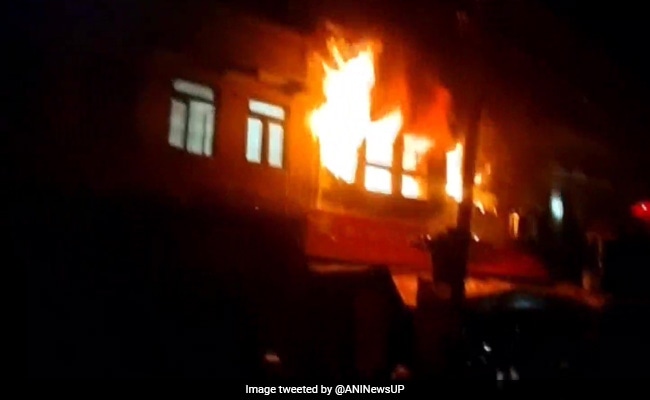 Six members of a family, including three children, were killed in Uttar Pradesh’s Firozabad last evening after a fire broke out at a factory in the ground floor of the building where they lived.

Three other members of the family were also injured in the fire and they have been admitted to the hospital for treatment, officials said.

The fire that broke out at the inverter factory soon spread to the upper floor where the family lived, said Ashish Tiwari, Superintendent of Police, Firozabad.

18 fire engines were rushed to the site that took about two-and-half hours to douse the flames, Mr Tiwari said, adding that since the area is congested, the rescuers had to put in extra efforts.

It is believed a short circuit at the factory led to the fire. The exact cause is yet to be ascertained, he said.

It is believed a short circuit at the factory led to the fire. The exact cause is yet to be ascertained, Mr Tiwari said.

Chief Minister Yogi Adityanath expressed grief over the loss of lives and announced a compensation of Rs 2 lakh for the family.

“The Chief Minister has directed the district administration officials for the proper treatment of the injured and wished them a speedy recovery,” the Chief Minister’s office said.

Crystal Tech News - October 2, 2021 0
What are the best cloud ERP systems for small businesses? Amazon Web Services (AWS) has been much loved by both small businesses and larger...

What to Expect on Your Wedding Day: Things You Should Know

Financial Service Company: The Importance of Managing Your Money, and Offering...

Lionel Messi Poses With FIFA World Trophy As He Flies Back...